Edit
This article is a stub. You can help Battle Bay Wiki by expanding it.

Wayward Pains has many ceilings and walls, and the capture area is located at the left. Players spawn at the middle and the far right, it depends. 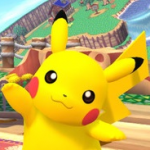